To all who are privileged to know him, Chris Hanson is an inspiration.? He’s genuine.? He’s the real deal.

Hanson is probably best known for two roles in media.? First, he’s a popular on-air personality on a top-ranked morning radio show in Fargo, North Dakota — known as?”Chris, John, and Jane in the Morning.”? Second, he’s the host of the nationally-televised weekly?program that airs primarily on CBS Sports, our very own?”Poker Night in America.” Hanson has also done lots of other work in radio and television over the past decade, mostly in sports.

Hanson grew up in Minnesota and South Dakota.? But his heart really lies in North Dakota, where he now both lives and works.? He’s one of the biggest boosters of North Dakota State University (Go Bison!),?which just so happens to be one of the most overachieving colleges in the?nation for its size.? Both athletically and academically, NDSU has made great strides way beyond merely what’s expected.? That sounds a lot like Hanson himself — the quintessential overachiever and?loyal family man — and the ultimate teammate.

Two words?that best describe Hanson would be?always?humble?and eternally?optimistic.? He’s achieved remarkable career?success, but remains steadily?anchored to much?simpler things in life like his family and community.? Hanson gets just as much satisfaction from seeing others succeed, as himself.? He loves to help others. 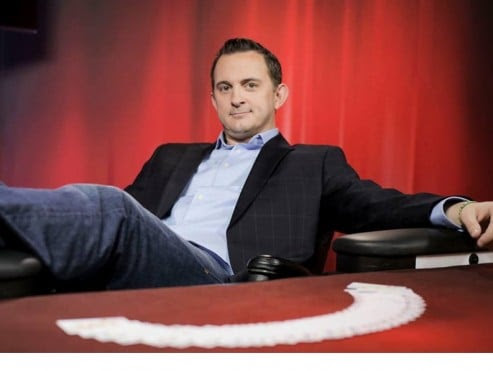 Hanson majored in mass communications in college.? His big break in poker came several years ago when he was picked to be the host of the “Heartland Poker Tour”television show.? When “Poker Night in America” was created in 2013, Hanson was the natural choice for a new show about the game and its diverse array of personalities.? Always adaptable to any situation, check out some of the footage from the first few seasons which reveal Hanson not just as a knowledgeable on-air host who can talk about any subject, but also a comedian perfectly willing to make fun of himself.

Speaking of making fun, one bit of confusion that annoys Hanson is occasionally being confused with the “other” Chris Hansen on television, who hosts NBC’s “To Catch a Predator.”? Although they share similar names, the only predator this Chris Hanson is likely to catch is a televised?interview with a world-class poker player.

When he’s not appearing on radio or television, Hanson can?frequently be found out on the golf course.? He once played in a late November snowstorm when it was 23 degrees.? Hanson finally had to quit the round after losing all his golf balls.

He has been the face and voice of “Poker Night in America” since its inception and we are privileged to have him as our host. 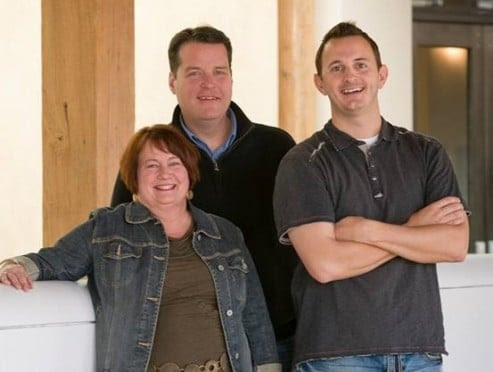 Chris Hanson (right) with the KBVB-FM radio show crew?(“Chris, John and Jane in the Morning”) in Fargo, ND

You betcha!? I’ve been here since 1995 when I came to college at North Dakota State University.? I was Fargo before Fargo was cool.? It is cool?? Right?

What thing do you love most?

Best meal you’ve ever had?

I’m a steak and potatoes man.? So, no surprise my favorite meal is dead animal.? I love Rube’s Grill Your Own in Montour, Iowa.? The atmosphere, the grills, the steaks, the beer, the Texas toast.it’s where I would go for my last meal on earth.

What are some of the things you stand for?

I stand for things that make the world a better place.?? Smiles, charity and kindness.?? I’m also a big supporter of blood donations.?? It’s a way you can give of yourself and it’s totally anonymous.? That’s how charity should be.

What are some of the things you stand against?

Just had this discussion with Todd Anderson (creator of “Poker Night in America”).? It bugs me when people try so hard to be something they are not.? You’re not young any more.accept it and be the best you.? You’re not rich.stop trying to pretend you are and love where you are in life.

What living person do you admire the most, and why?

Anyone who works hard for a living.? We all say we work hard, but some people really have to work HARD in their lives.? Those people have my respect.

What historical figure do you admire the most, and why?

Superman.? Does that count?? He didn’t ask for the gifts he had and he just wanted to blend in and not be known for what he could do.? He could?have ruled the world.but he just wanted Lois to love him.

What living person do you despise?

If money were not an object, what profession would you chose?

Are you kidding?? I’m doing it!? I love my radio show and I love meeting the people involved with “Poker Night in America.”

What is it about yourself that you are most proud of?

I don’t burn bridges.? Todd Anderson makes fun of me on the fact that I don’t say or do anything too controversial.? I always try to leave everyone with a great impression of me.

What is it about yourself that you’d like to change?

The fact that I don’t listen enough.? I’m getting better at it, but I think this world needs more listeners.

What’s the most exciting thing you’ve ever done?

Having kids.? Nothing will put you in your place in so many ways, like having kids.? We have?four (ages 12, 10, 8, 6) and they test you every day.? It’s terrifying and exciting and rewarding all at the same time.? Not many other things can say that.

What’s the most unusual time and place you’ve ever visited?

Weird one, but one I think of this all the time when I travel.? It was the weekend after 9/11 and I was on a flight to Pittsburgh for a wedding.? There was a pretty bad thunderstorm we had to fly though with lots of turbulence and couple that with nervous passengers, a woman screams “We’re All Gonna Die!!!” I will never forget that flight.??

Name a place you’ve never visited where you still want to go.

I’ve had this picture in my mind of a hut type of thing.on stilts.in crystal blue water.? With a long rickety walkway to get to it.? I don’t know where that is, but I want to spend?two weeks there.

Book:? To be honest, I’m not a reader.? I just finished one of my first ever non-poker books, “Gone Girl” by Gillian Flynn.? So, I guess that’s my favorite.

Movie:? Toss up between “Fight Club” and “Dumb and Dumber.”

Musician:? Darius Rucker.? He is the nicest guy in person and I’ve been a fan since “back in the day” with Hootie.? Plus we both love golf.

What upsets you the most?

Not much.? I’d guess it’s when people ask me about “To Catch A Predator.”? I’m Chris Hanson, he’s Chris Hansen.

Pretty much anything on E!

100 percent.? ??Everyone should have something to look forward to. 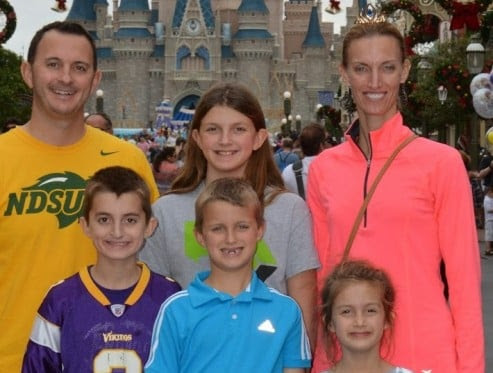 Editorial Note: ?The following profile on Chris Hanson first appeared earlier this year at?www.nolandalla.com. ? It has been moderated slightly and is reprinted here with permission.