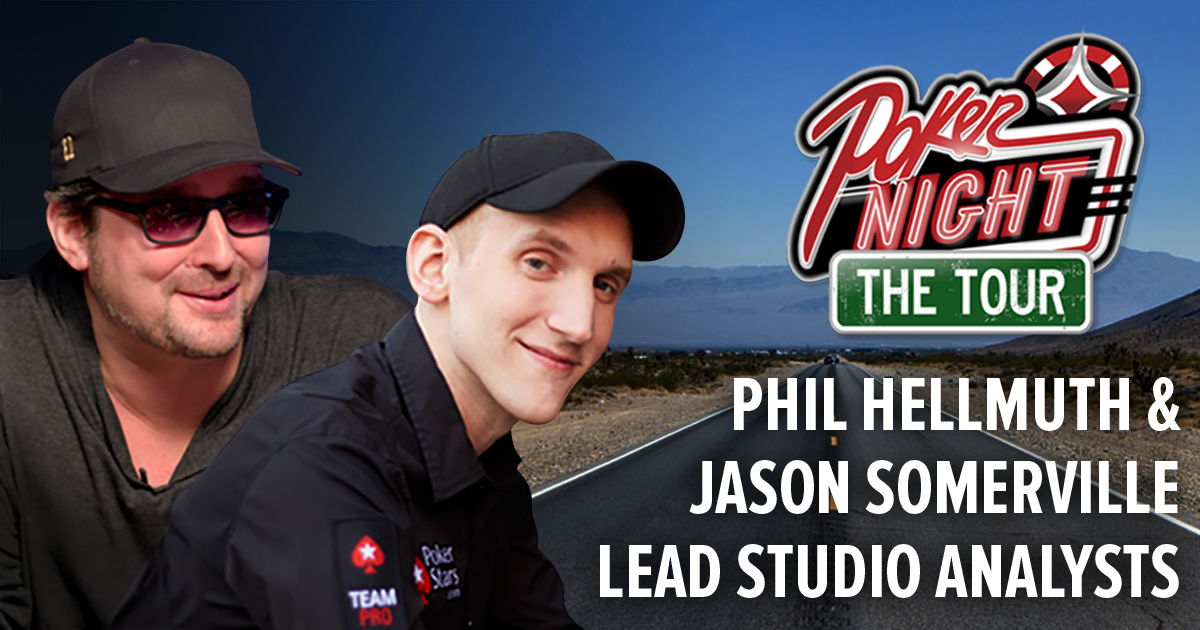 Las Vegas, NV, August 7, 2015 – Phil Hellmuth, one of the world’s most popular poker players, alongside Jason Somerville, poker’s top digital ambassador and newest A-lister, announced today that they have signed on to be the studio analysts for Poker Night: The Tour, a new poker series slated to debut in early 2016.

The role of ‘studio analyst’ is set to be a departure from the normal poker commentary playbook and will offer a fresh look at how poker shows use feature poker pros to break down the action for the viewer.

“Think halftime shows on NBA and NFL broadcasts.” said Dustin Iannotti, the show’s executive producer. “We want to create the feeling of this being a real ‘event’ and events in sports have always delivered pro commentary at halftime that is equally as entertaining as the game itself. We can recreate this in poker, and there are no two pros better to do this than Phil and Jason.”

“The great thing about this concept is that it allows Jason and I the chance to defend our opinions to each other about hands played and even player personalities.” Said Hellmuth. “We are both outspoken and not afraid to disagree, which should make for entertaining television.”

For Jason Somerville, it’s his first foray into hosting television, but he’s logged hundreds of hours hosting Run it UP, poker’s most popular live stream on Twitch.

s”I’m incredibly excited to work with the legendary Phil Hellmuth as well as the fantastic Poker Night in America team. I believe Phil and I will provide unique, fun, engaging insights into the game we both love and I look forward to Phil calling me an idiot from Northern America on TV on a weekly basis,” said Somerville.

“Having these two together feels like the perfect mix of a veteran and a young gun and I expect them raise the bar in poker broadcasting,” said Poker Night President Todd Anderson. “We believe having Phil and Jason alongside our play-by-play commentators Maria Ho and David Tuchman will set a new standard in poker commentary.”

The Tour series will begin filming episodes this weekend at Turning Stone Resort Casino in Verona, NY for their Empire State Hold’em Championship event which starts August 7th. From there the tour moves south to Seminole Hard Rock Hotel & Casino in Hollywood, FL for a special four tournament, four simultaneous final table Seminole Hard Rock Poker Open with Phil Hellmuth acting as Master of Ceremony. The Poker Night Tour will wrap up August with a $1650 main event near Minneapolis, MN with an event at the Canterbury Card Club. All of the August events are open to the public.